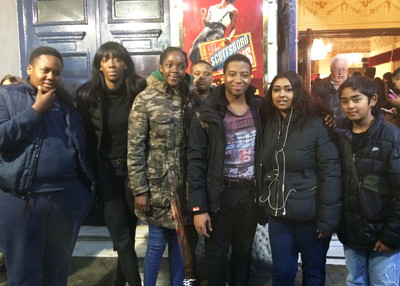 As part of programming for Black History Month, SkyWay took 11 young people to see The Scottsboro Boys at the Garrick Theatre in London’s West End on 29 October. The Scottsboro Boys is a new musical that recounts the unjust trials and convictions of eight young black men in Alabama in the 1930s. The young people enjoyed the performance and appreciated the historical events and the Scottsboro Boys’ legacy in addressing Civil Rights in the United States.

In 1931, a group of white and black carriage riders were ‘hoboing’ along the US southern railways searching for work. A fight between nine black teenagers and a group of white men and women broke out in one of the carriages resulting in all the whites being kicked off the trains, and the nine black teenagers being arrested for assault when they reached Paint Rock, Alabama. Two of the white women on the train accused the nine teenagers of rape, a crime punishable by the death penalty.

The nine Scottsboro Boys were tried before an all-white jury and represented by under-qualified lawyers. All but the youngest were found guilty and sentenced to death despite there being insubstantial evidence that the rape allegations were true. The sentences sparked demonstrations in Harlem and caught the attention of The American Communist Party who campaigned for a re-trial. Three days before their execution, The Alabama Supreme Court granted them indefinite stays of execution. In 1932, one of the women who had accused the young men of rape publicly admitted to lying about the accusation claiming that the police had pressured her to do so. After numerous protests and re-trials, The Scottsboro Boys were never sentenced to the death penalty, and four of the eight were acquitted of all charges, while the others served life-long prison sentences.

The last of the Scottsboro Boys died in 1989, and all were officially exonerated in 2013 by the Governor of Alabama, 82 years after the original trial. Regarding the exoneration, Alabama State Representative said “While we cannot erase the dark days when the Scottsboro Boys incident occurred, what we have done is acknowledge our mistake. Hopefully, our great State of Alabama can be Alabama the Beautiful, where justice is dispensed equally and fairly without regard to race, sex, social class or religious belief.”

In February 2013, The Scottsboro Boys, the musical, premiered in London and won the Critic’s Circle Theatre Award for Best Musical in 2014. The young people who attended the performance with SkyWay enjoyed the experience and were moved by the story. One young person said that “Even though I normally do not like musicals, I actually liked this one as it was based on facts.” Another was quoted after the show saying “I really found the Scottsboro Boys musical interesting.  I didn’t know that people, black people, could be sent to jail continuously with no evidence.  Just shows how the civil rights movement has progressed over the decades!”

For more information about The Scottsboro Boys and how to get tickets, visit the musical’s website at http://www.scottsboromusicallondon.com.

Pumpkins aren't just for carving! Here is an old youth club favourite at this time…

Our annual football tournament 'Teenage Kicks' was a roaring success. The weather held out and…

It’s been a hot one, but what a summer we’ve had! Bowling, BMX riding, a…