SkyWay transformed a local space into a usable garden space where fruit, vegetables and plants could be grown. The aim was to get young people involved in the process from beginning to the end; however, it wasn’t long before we realised that gardening was going to be much harder to get young people interested in than many of the other activities on offer.

For the initial stages of the process – clearing and building of raised beds – not one young person was willing to help out. Fortunately, volunteers from local businesses lent a hand and the space began to change. After a while young people began to ask questions like ‘can we go in there?’, ‘what is that?’ and ‘can you eat that?’, but getting them to actually take part was still a challenge.

Groups were taken through and given an explanation about each of the plants. They tasted some of the produce (mostly salad leaves and herbs at this point) which received mixed reactions, but there was still little interest in actually getting their hands dirty. 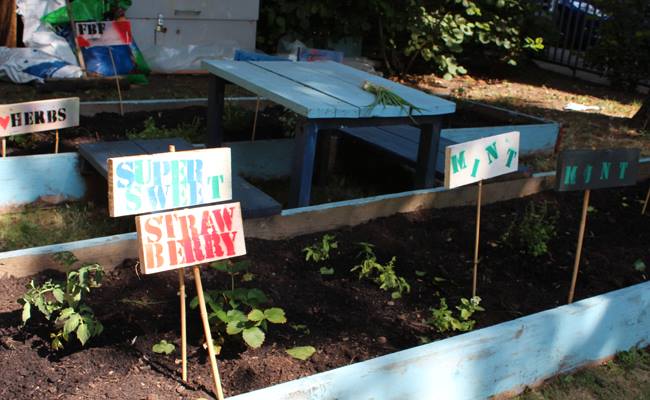 Within one of the regular meetings with young people, a discussion was started about the space and how they could get involved. They came up with the idea to make a garden of their own, which they could grow and sell the produce from. They chose to make raised beds shaped as a ‘B’ and ‘H’ which stands for ‘Blue Hut’, the name of the nearby youth club. Over the summer the young people built the beds and planted them, with different young people working on different days.

The young people went from not really knowing what gardening was to working together to plan and build one themselves. They also benefited from learning about recycling, sustainability, carpentry, growing, the weather, growing seasons and the environment.